As mentioned in this forum, over the past seven months, I have spent a ridiculous amount of time attempting to setup Xcode on laptops running 10.13.6 and 10.15.5. I would like this over so I can move on to development, and eventually purchasing sensors for resale. Below are my notes on the Apple OS installation tutorial, which has errors and inconsistencies:

You will be asked for the computer user password, no indication on the terminal is given that characters are being entered. Press the return key to continue, this step will take some time and have some pauses, wait until your username is displayed again.

Step 1.2.3 Git
Typing Git -–version
Returns the version #, not the path as shown in the tutorial

Typing Which gem
Returns the following: 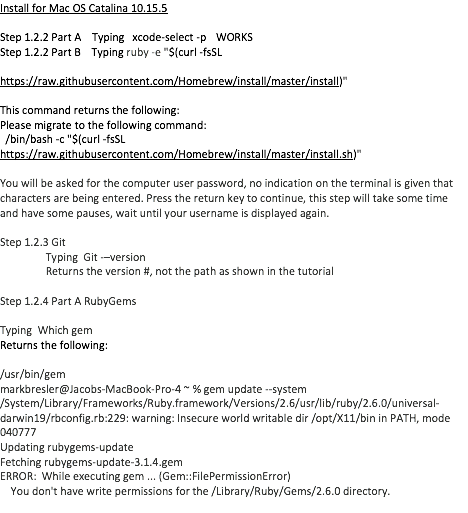 I have been stalled at this step on both operating systems despite many, many internet searches.
Thanks,
Mark